Dark Legacy: The End of the Kai available as a FREE ebook!

It is my great pleasure to announce that Dark Legacy: Book I - Trinity is now available in five editions from ebooks to paperback to hardcover!

But before I get to the details of those five editions please take note that Dark Legacy: The End of the Kai is available as a completely FREE ebook download on Lulu, the iBookstore, the Barnes & Noble NOOK, Kobo, and Google Play.

To get your hands on a FREE digital copy of The End of the Kai select and click from the options listed below.

Now getting back to the five editions available of Dark Legacy: Book I - Trinity (this book includes The End of the Kai). I am very pleased to announce that Dark Legacy: Trinity is available for all eReader devices from the iPad to the NOOK to the Kindle, while also being available as a 6x9 paperback on Lulu and Amazon; and--for those die-hard fans--as a 6x9 casewrap hardcover on Lulu!

To get your copy please visit the following online stores listed below.

And on a final note, be sure to visit the official website for The Legacy Cycle @ 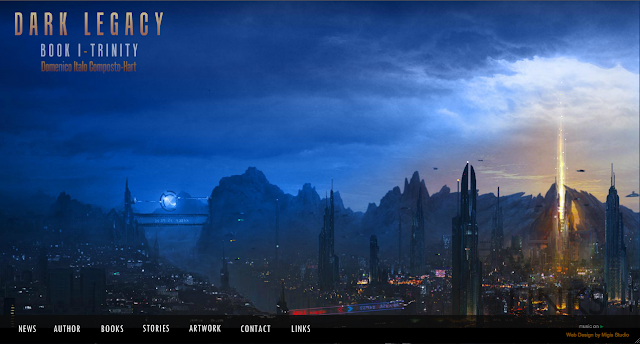 Posted by The Legacy Cycle at 3:33 AM
Email ThisBlogThis!Share to TwitterShare to FacebookShare to Pinterest

It has been exactly one year since the launch of my first sci-fi/fantasy novel, Dark Legacy: Book I - Trinity. And I am very proud to announce that the book has joined the 21st century by being available as an eBook for the Amazon Kindle, the Barnes & Noble NOOK, the iPad, iPhone, and iPod, as well as for most other eReaders.

You can click the following links to get the eBook version of Dark Legacy (sample the beginning of the book on Amazon for free):

During the past twelve months I have been promoting the book through all available internet avenues such as Facebook, Twitter, Goodreads.com, YouTube, and to a certain extent LinkedIn. There is still more virtual terrain to cover such as Smashwords.com and more traditional means of getting exposure through bookstore events and speaking to literature students in high schools to encourage them to also self-publish. But 2012 is the year that I need to take a break from aggressively promoting the book via the web and sit down and focus on the craft of writing. There are four literary works that I hope to hammer out over the course of this year: one is a short-story, two are novels, and one is a travel memoir.

The working title for the science fiction short story I have been kicking around for the past couple of months is Rise of the White Lion. Peter Saga of Science Fiction Freedom E'Zine was trying to put together a science fiction superhero issue back in the autumn of last year. He asked me if I could come up with something with the condition that it be based in the city where I am currently living in (Barcelona). I found the request a difficult challenge as my initial ideas were typical and easily rejected by my wife. Finally, I settled on a concept that I was content with revolving around GP Motorcycle racing, the myth of Saint George, projecting the future outcomes of the current economic crisis on the EU, aspects of Gaudí architecture, Japanese robot technology, corporate espionage, and the rise of China as a significant 21st century superpower. This is all I will say for now. I am hoping to have a final draft of the short story completed by the first week of February after which I will pass the story along to the amazingly talented concept artist, Wayne Haag, who provided the beautiful artwork for my steampunk short story, The Astor House of Old Shanghai.

After writing The Astor House of Old Shanghai as a short story and getting a lot of positive feedback and encouragement from Wayne Haag, my wife, and readers of Science Fiction Freedom E'Zine I have decided to expand the short story into a full length steampunk novel. As a result I have been reading as much as I can on the art and history of espionage, Chinese history, the Boxer Rebellion, the Spanish-American War, and the history of Shanghai during the Victorian period. I am very excited by the evolving storyline of the characters, Nicholas Winter and Sir Vernon George Waldegrave Kell (founder of MI5). A lot of the ideas, values, and concepts I have for The Astor House will in some way also feed into Dark Legacy: Book II - Travels. The storyline for Dark Legacy: Book II is still coming together in my mind and reading up on the Boxer Rebellion, Chinese history, etc. for The Astor House is helping me solidify the details and direction of Dark Legacy: Book II. I plan to finish up the first act of Dark Legacy by the summer of 2012 while working in tandem on The Astor House.

Last, but not least, is a travel memoir that I would like to publish by the end of 2012. The writing is done and it is all up on this blog (go back to entries from 2004), but I need to edit it and format it for publication. The memoir is from my travels in the late winter, spring, and summer of 2004 in Southeast Asia, East Asia, Siberia, Scandinavia, and Eastern and Western Europe. If anything my hope for the memoir is for it to stand as a document for my children, and their children, and hopefully their children; to in some way speak to future members of my family and encourage them to travel far and wide into this world. The memoir also reveals how my wife and I first met at the top of a pyramid temple in the ancient ruins of Angkor Wat on the 21st of May, 2004.

Well, let it begin. Time to sit down and write.
With magic,
Domenico
Posted by The Legacy Cycle at 2:41 AM
Email ThisBlogThis!Share to TwitterShare to FacebookShare to Pinterest
Newer Posts Older Posts Home
Subscribe to: Posts (Atom)