Dark Legacy: The End of the Kai featured on Wattpad

Over the summer I received an email from Gavin Wilson, a prolific writer and Wattpad Ambassador from the UK, who had come across Dark Legacy: The End of the Kai on Kobo. He encouraged me to join the Wattpad community of more than 15 million monthly users as another online outlet to expose and share my written work. I soon created my account and uploaded The End of the Kai and the first three chapters of Book I - Trinity of Dark Legacy. I was happy to discover within a few days of joining the site that authors I greatly admired such as Margaret Atwood (The Handmaid's Tail), Paulo Coelho (The Alchemist), and Brandon Sanderson (The Wheel of Time books 12, 13, and 14), along with indy authors Daniel Arenson (Blood of Requiem: Song of Dragons) and Amanda Hocking (Trylle Trilogy) were members. A few weeks later Gavin connected me to Pam and Samantha Pennington at Wattpad headquarters in Toronto, Canada, to begin the process of having Dark Legacy: The End of the Kai featured on their site during the month of September. It was a very pleasant, encouraging, and professional experience working with them. 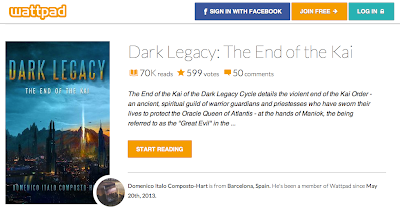 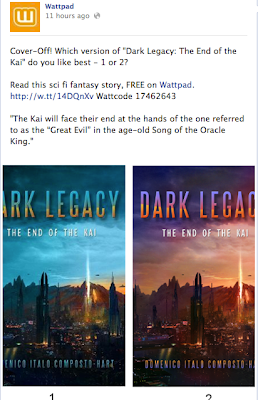 As of December 2013 Dark Legacy: The End of the Kai has hit 180,000+ reads on Wattpad. I am very grateful to Gavin and the Wattpad team for the incredible opportunity to have been featured on their site and for their continued support. I strongly encourage any and all avid readers and writers to join the Wattpad community where one can connect, read, write, provide and receive constructive feedback from members from all parts of the globe.

Before signing off I will mention that I have over 200 pages written for Dark Legacy: Book II - Travels. I am very excited about the direction and pace of this book. The sequel will begin right where Book I - Trinity left off. The world beyond Lemuria's western coastal borders will come into greater focus as the political, economic, and military complexities of the Atlantean Empire are revealed. The story and direction of this book has become very clear to me over the past year and provided the time I know I can finish the first complete draft of this book sometime next year.

The very talented Tiberius Viris and I have also moved forward with the details in using his painting Hall of the Dragon Mist as the cover for my 2004 travel memoir, Travels in the Land of Hunger. A final cover design should be completed and revealed in early 2014. All that remains is for a small group of outside eyes and an editor to read through and edit down the completed draft of the memoir before it is to be released for publication.

With Warmth and Gratitude,
Domenico